Sooner wanted me to thank everyone for the amazing Power of the Paw they've been sending out for him. He said he can really feel it! He's still feeling pretty miserable, but he's fighting through it. He got to go out into the potty yard a little yesterday when his foster momma visited. 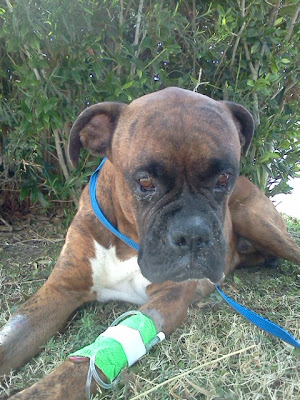 We got his blood test results back and are cautiously optimistic. The distemper test is NOT 100% reliable, but it came back negative so we're happy about that. It's still a possibility. But he also got positive results on three other diseases that explain his symptoms AND are curable! So we're hoping that those are the cause of his sickies and he will be better after we've treated them. His tests showed positive for Corona, Mycoplasma, and Parainfluenza. Like I said, they're all curable, so we're treating him for those and hopefully he'll be doing a LOT better soon!! Keep your paws crossed for him. Fight, Sooner Bear!
Posted by Matilda the Boxer at 7:55 AM