Pigeon has always been a climbing kitty. She loved hanging out on top of the kitchen cabinets, and Momma put two beds up in her favorite perches so she could lounge in comfort. But Momma noticed that Pidge hasn't been up to those spots in ages. She thinks that Pigeon's age is getting to her. Instead, Pigeon is always hanging out on the kitchen table or the window seat next to it. So Momma set up a surprise for her... 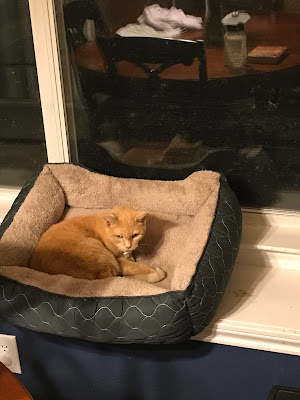 That's right, a fancy new bed JUST for her. 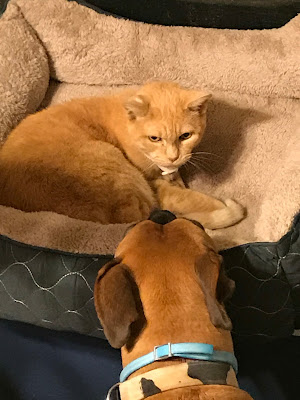 "You hear Momma, Jessie. This is MY bed! No puppers allowed." 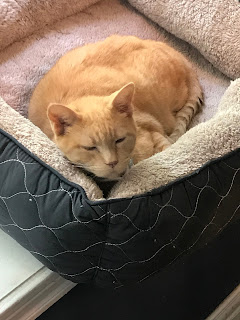 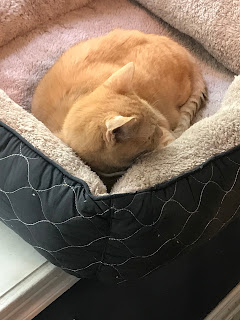 "Ahhhhhh. Peace and coziness at last!"

Momma said something silly last night. We had a storm blow in last night, with lots of thunder and lightning and wind. Storms never bother me, but Jessie gets pretty skeered by them. Well, the storm blew in just as Momma was getting ready to start Jessie's nightly camel treatment. Normally Jessie's really good about those, but with the storm too, it was just too much for her. Every time Momma tried to get the needle in, Jessie flinched away. Finally Momma gave up so she wouldn't traumatize poor Jessie for life, and we all got in bed. Well, Momma and I did. Jessie was still being skeered, so Momma had to coax her to jump up. Then she just sat straight up, still shaking, while Momma petted her. Me, I was snoring in no time. But Momma finally had to pull Jessie down so she'd lie down. Jessie laid there for a second, then stretched her head out over Momma's chest, let out a DEEP sigh, and was snoring in the next breath. 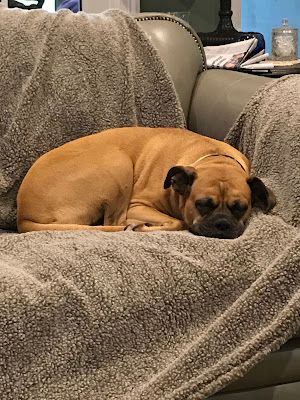 That's when Momma said the silly thing. She petted Jessie's head and said, "I'm so glad you trust me this much." Isn't that silly? I mean, she's our momma. Our human, the one we chose for our very own. Humans were put on this earth to take care of us, and we were put here to love them. So even when there's skeery stuff like a storm or Vacula or that suspicious bunny that I KNOW is the vanguard of a whole bunny army, Momma ALWAYS makes it better. 'Cause that's her job!
Posted by Matilda the Boxer at 8:33 AM 16 comments: 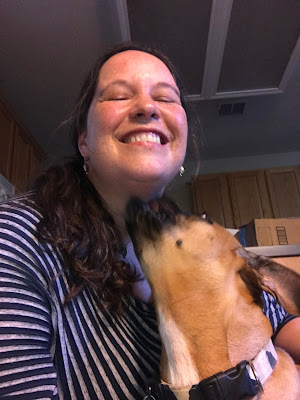 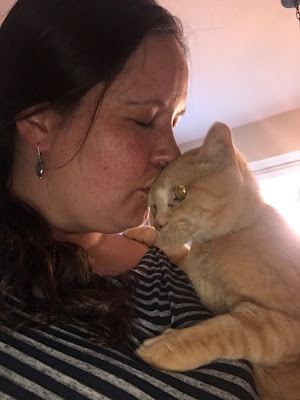 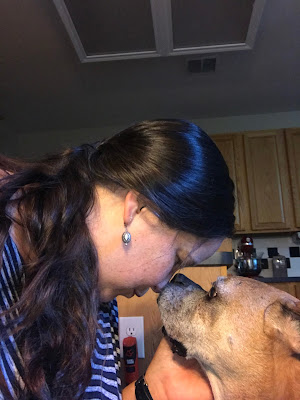 Don't ever go away again, okay Momma?
Posted by Matilda the Boxer at 8:25 AM 11 comments: 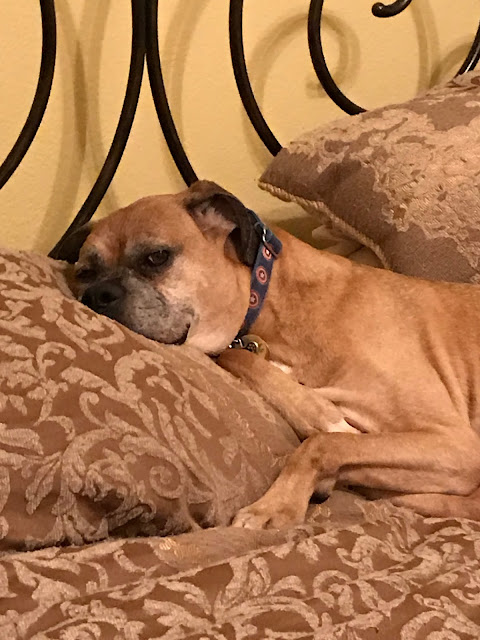 I think I feel faint... Momma is packing all our things so we can go to Grandma and Grandpa's house. That's good, right? Except she's LEAVING us there and going to a conference thingy for work. She just got BACK from going away! How can she do this to us again?!?!

So we may be a little quiet for a few days, until (and unless!) Momma comes back for us. Sniff. Sob. Send treats, I may lose the will to eat!
Posted by Matilda the Boxer at 3:45 PM 16 comments:

Momma wanted to share this today, so I'm generously letting her. 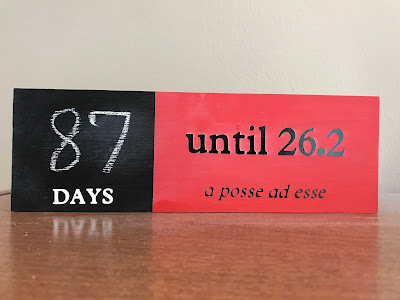 This is her countdown for her next marathon. She's running Chicago in October. She said that WE say 87 like it's a huuuuuge number, but it seems just around the corner to her. BOL!
Posted by Matilda the Boxer at 8:09 AM 16 comments:

Wordless Wednesday: Why is that more important than ME? edition 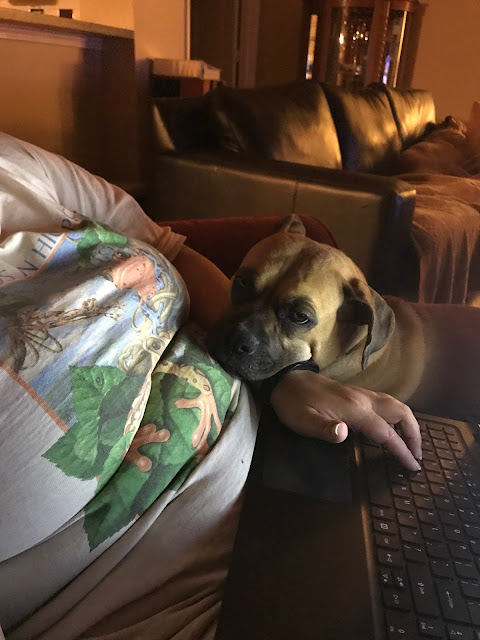 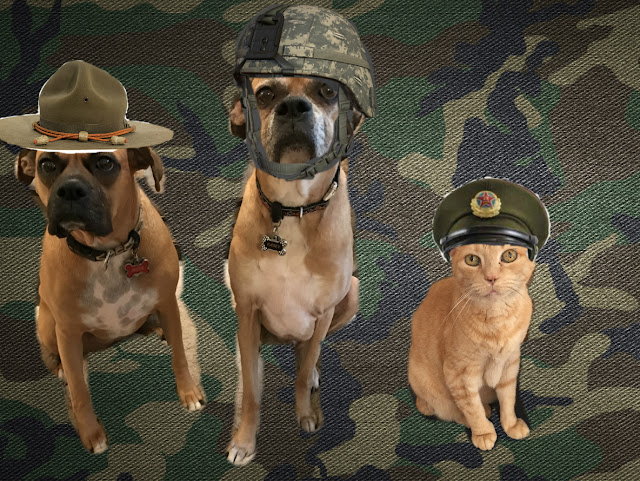 Yup, puppers and kitkats, this is nothing short of all-out warfare. Do you know what happened to us last night?? All three of us? We got BAFFS!!! LONG baffs, with three or fours sudsing! And then brushing and spraying and Momma sweeping and spraying and vacuuming all over the house. Because we're a WAR with a horrible enemy -- FLEAS!!!! Momma is SO upset, because none of us have EVER had fleas before. But we're armed to the teeth, and we're going to take back our house!!!

PeeS: Send rations!
Posted by Matilda the Boxer at 9:00 AM 17 comments:

Momma had a whole post to explain it and wish you a Happy Independence Day, but she furgot to set it before she left. Siiiiiiigh. So furst.... 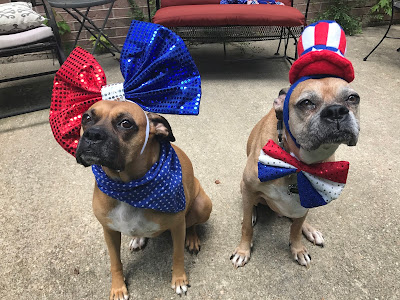 So we were out fur a few days because Momma went on a trip with Grandma and Grandpa and Uncle Adam. She said they had a lot of fun. In the meantime, Jessie, Pigeon and I got to hang out with My Boy! He came to stay at our house, which was very nice of him but honestly...I missed my momma. 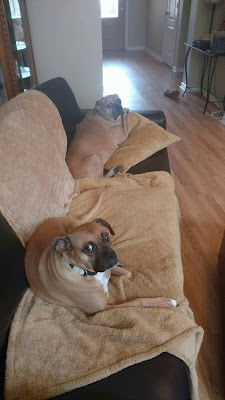 "When is she coming back, Boy?"

Jessie didn't mind so much. She spent a lot of time hanging out with Pigeon. 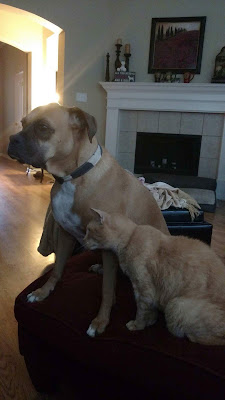 Pigeon did a little boxing. 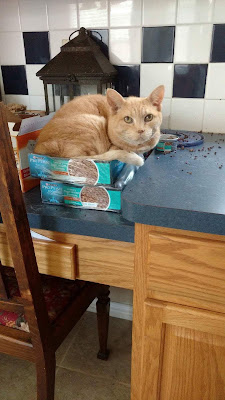 And Jessie and I did a little quality napping. 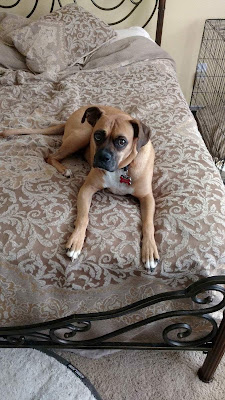 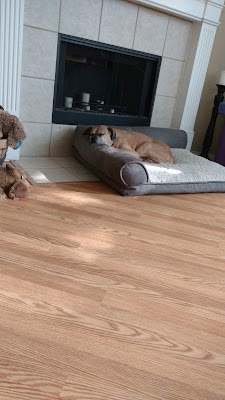 It was grreat having My Boy visit, but in my old age, I'm finding there's really NO ONE like my momma.
Posted by Matilda the Boxer at 9:06 AM 17 comments: