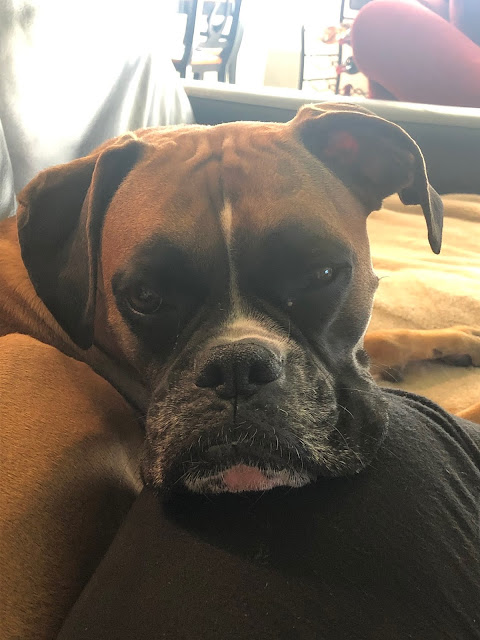 Sorry I've been so quiet lately, folks! Momma is just really bad at remembering to put up blog posts. But for Nature Friday, I'll show you the Memorial Garden in our backyard that Momma finally weeded and mulched and rearranged the stones in. St. Francis is watching over all of our angels. 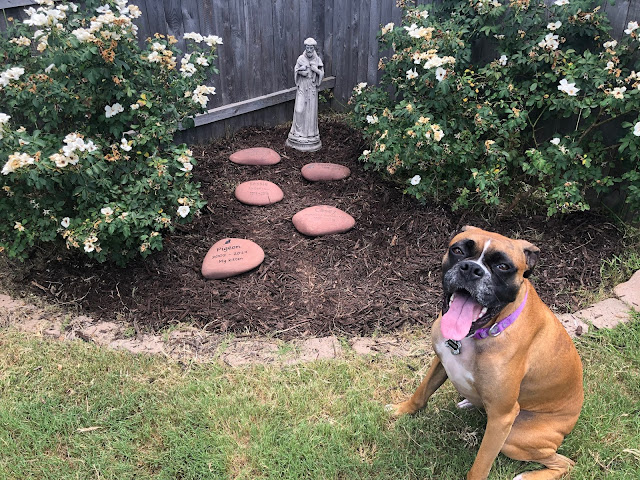 Have a pawesome weekend, efurrybody! And I'll try to get Momma to work on the posting. 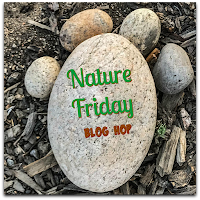 Last night Momma decided that I was grown up enough for something she'd been saving. See, you might remember when I was young, there was a teeny tiny problem around here of pillows spontaneously exploding. 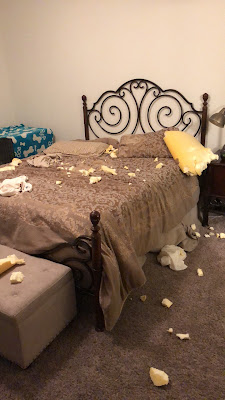 Weird, right?? Anyway, Momma hid the last surviving dog bed away so that wouldn't happen to it too. But last night she said that I'm so grown up now and have been such a good girl that she knew I'd protect the dog bed from exploding. So she brought it out of hiding and set it up in her craft room so I could watch her work! 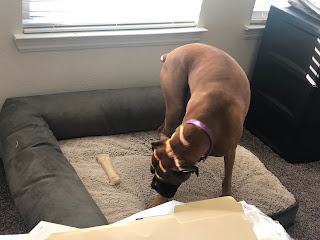 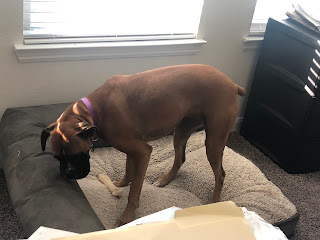 So the Witness Protection Program is in the garage? 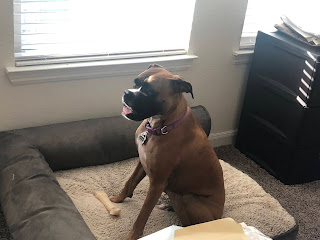 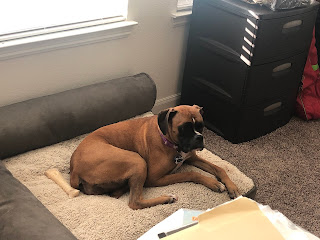 It passes the laying test too! 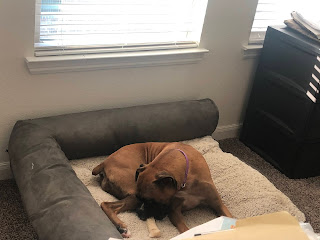 I guess we've got a new place to hang out, Boney! 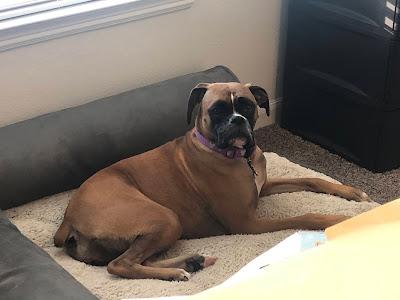 Excellent, Momma. It has the Matilda seal of approval! 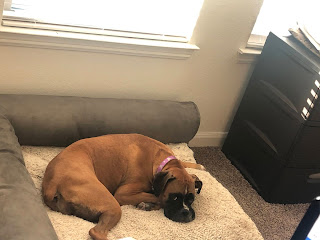 Uh....you're not just going to keep taking pictures all the time, are you? We're done.


PeeS: We've been getting some really nasty comments on our blog lately from spammers, so Momma is turning the word verification feature on for a while.
Posted by Matilda the Boxer at 8:15 AM 11 comments:

Yesterday was my TWO YEAR adoptiversary, so Momma took me on an adventure after work! 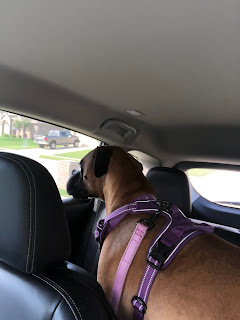 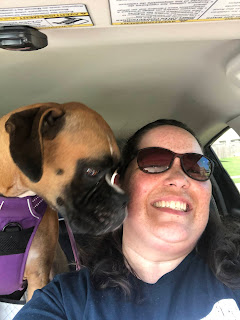 I was very curious and wanted to know where we were going, but Momma said "mum's the word!" I told her I call her momma, not mum. Weird. Anyway, she drove a little bit, and then I recognized the parking lot we pulled into. OMD, it's Petsmart!! 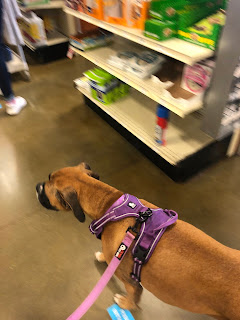 We'd have more pictures of that except I was a blur of excitement! I got to meet a real fun other dog, see a tiny 6-week-old puppy in her momma's arms, and pick out a bunch of pawesome new stuff! (More on that later.) And then.... 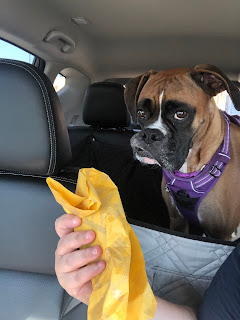 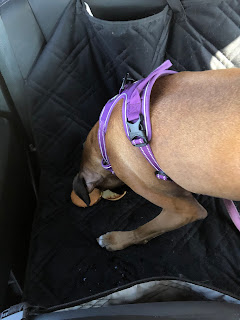 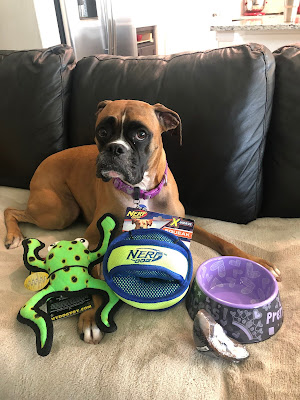 So dis is my haul of pawesome adoptiversary presents! That's a new purple bowl that says "pretty princess," which I am. I wanted a pretty travel bowl to take with me when we visit our Best Guy's house. Then I got a new frog that throws REALLY good, a totally pawesome ball, AND a stuffed hoof! 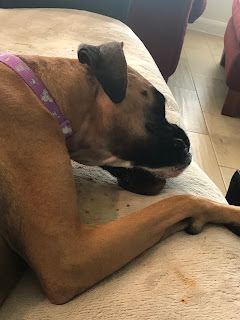 I went to town on that hoof right away. Momma said she's never had a dog demolish one so quickly. She put it up after I almost swallowed it whole twice and said I can have it back as a supervision-only chewie. 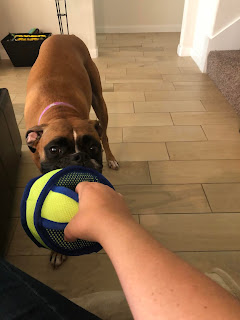 The new ball is SO cool!! I can bat it around on the floor like the soccer ball I like to play with when the kids over the fence throw it to me, but then it ALSO works for Momma to play tug and fetch with it! Can you believes that?? 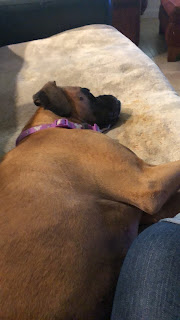 This is me in my toy coma afterwards. Play hard, sleep hard is my motto! 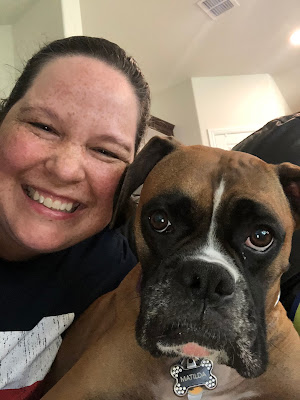 I loves you, Momma. That was a grreat adoptiversary adventure!! I'm looking forward to many more years of them.
Posted by Matilda the Boxer at 9:04 AM 12 comments:

It's my Gotcha Day!!

That's right, two years ago TODAY I came home with Momma furever! Can you believes it?? 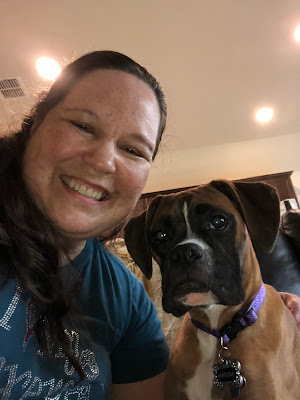 Yup, there's our official adoption pawtrait. I look so tiny, don't I?? 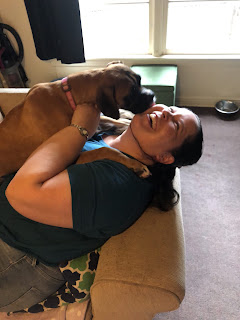 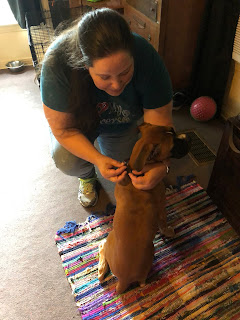 I knew right away when Momma showed up at my foster home that day that she was there to bring me home furever and ever. Then I got to go home and start making furiends with my new sister. 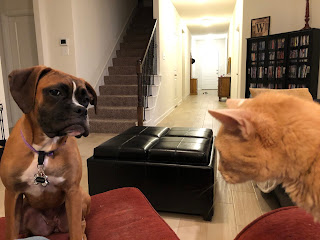 Pigeon took a little while to warm up to me, but she was the bestest sissy. 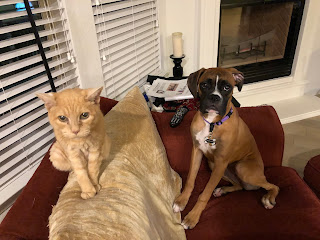 Momma says we'll have an Adoptiversary Adventure today, so I'll report back tomorrow with all the news! 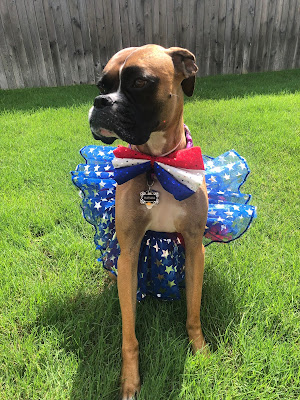 Today is America's barkday. Momma and I celebrated by watching Hamilton yesterday and learning all about our nation's birth. She says we're going to watch it again a few times today before a special surprising tonight. I'd better get all warmed up. Me me me me me! 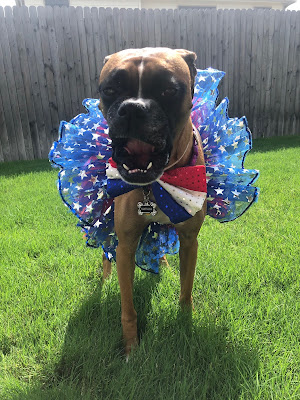 "I"m not throwing away my shot!"

We hope you have a wonderful Fourth of July!
Posted by Matilda the Boxer at 8:38 AM 12 comments: