You know, I'm proud every single day to be an LBR ambassador. This group does PAWSOME work to help dogs. But sometimes things happen that make me just about bust my buttons (if I wore any) with pride at the amazing work our volunteers do.  I want to tell you an amazing story today about a dog nearly everyone would've given up on by now, and what hard work, lots of patience, and a whole lot of love can do.

Everybody meet Tallahassee! You can read her full story at our earlier post, but the short version is she was abandoned in a back yard and nobody found her for a long time. By then she was pretty much feral and didn't want anything to do with people. She was named a Keeper (a dog LBR keeps permanently because of a health or behavioral problem that means they can't be adopted) and lives with Aunt Kaffy and her big pack of dogs. Aunt Kaffy's fiance Victor has been doing lots of work with her lately, and... well, I can't find the words, so I'm just going to repeat it exactly like Aunt Kaffy told all of us at LBR. 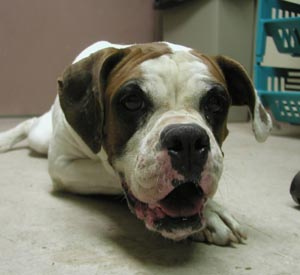 "A breakthrough.  For the first time since September 23, 2007, Tallahassee has left the safety of her foster home and yard for a walk around the neighborhood!  Not once, but TWICE now.

Victor has been working with her to get her used to the leash and with a little prodding from me (literally prodding from behind) Tallahassee has done something I never dreamed would happen.  She went for a walk.

For those that are new, Tallahassee is basically feral and has been with me since September 23, 2007.  She was deemed un adoptable because of her extreme fear of everything.  She doesn't like to be touched much and shakes uncontrollably if she gets too much attention. She was left abandoned in a backyard and has a lot of trust issues.   She's a Legacy Keeper.

The one time in the 4.5 years that I've had her that she left my house was last year when we had to heavily sedate her for her long past due vet visit.  I had given her vaccinations all of the previous years, but it was time for a real vet visit and heartworm check.  Gail and I drugged her, muzzled her and drove her to the vet where she had to be carried in and out of the car.

When Victor moved in, she quickly became his favorite.  Probably because she isn't annoying like the other dogs that constantly seek attention :)  She just hangs out and watches.  He spoils her rotten.  Baby talking to her and sneaking her food.  She loves him.  She'll come put her head on his lap while he eats.  It's ridiculous.  Victor says that Tally is his dog.

He decided that Tally needs to go for walks, so for several weeks now, he's been putting the leash on her while I'm at work and doing his best to get her to walk.  At first, he did a lot of chasing her just to get the leash on, then when it was on, she froze and refused to move.

Lately, he can walk up to her and as long as he goes slowly, can snap the leash right on.  My job has been to move up behind her and get her to move out of her comfort zone.  I walk up behind her and say "Let's go walkies Tally" and she does her best to get away from me, so the result is that he and she walk away.  It worked.

On Saturday, we made three consecutive laps around the yard without her fighting to get away.

On Sunday, a couple of laps around the yard, then I decided that we should see what would happen if she was out of the safety of the yard.  I found a martingale collar which we used so she couldn't slip her regular collar.  I put Winston and Hensley outside so they couldn't interfere, got Ike in his harness and opened the front door.  She has never ever ever willingly walked past the front door threshold. The fence blew down one time and all of the dogs escaped but not Tally.  She would not leave the yard no matter what.

Ike and I went out and called back to her and Victor and said "Come on Tally!  Let's go for a walk." 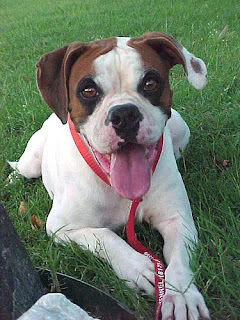 Amazingly, she followed.  I could NOT believe it.  We went left over to the school first.  She was doing GREAT, a little scared, but still not jumping around on the leash like a marlin which is what I expected to happen.  Next, we went down the street towards the other end.  I was afraid that she would stop at our house and the open front door and try to run back in.  She gave it a quick look like she wanted to go that way, but we kept walking.  We walked all the way to the end of the street and turned around.  She stopped a few times to lift her head and take in the scenery and look at the barking dogs behind the fences.  It was all that I could do to keep from sobbing.  I was SO proud of her.  I walked Ike and she and Victor followed behind.

I shot a couple of videos.  The one in the link below is her first walk down the street.  It's not very good, but you get to see her coming out of her shell and being a regular dog!

I got home tonight and asked jokingly is they had gone on another walk.  When Victor told me that as a matter of fact they did, I couldn't believe it.  He took Ike and Tally together and told me that she really enjoyed it.  I'm so proud of her and even more proud of Victor for wanting to help her be happy and for seeing past the scared exterior to the boxer spirit that I just know is in her heart trying to come out.

So, without further ado (and apologies for the terrible video), for your viewing pleasure:  Tally Takes a Tour!"