Gather round, pups and cats, and Uncle Casey will tell you a story!  You know I love to tell you folks all about the PAWSOME boxers that have found their homes through Legacy Boxer Rescue. Well, today I'm going to tell you about a very unique boxer.  His name is Mister Magoo. 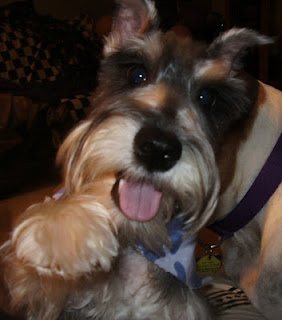 I know what you're all thinking -- oh my, what an incredibly handsome boxer he is! And you're right, he's extremely handsome. Just look at those great boxer jowlies, and the cute little boxer ears, and not to mention that boxer tongue! I'll admit his coloring is a teeny bit unusual for a boxer.  But look, he's even got a cute little boxer nubbie! 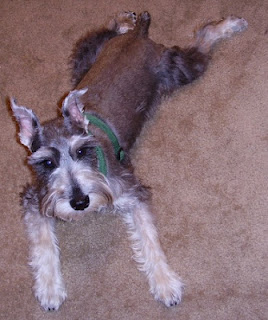 Okay, okay, you got me! Magoo isn't exactly what you'd call a traditional boxer. But he still found his home through LBR! That's the fun part of the story, so settle in now. 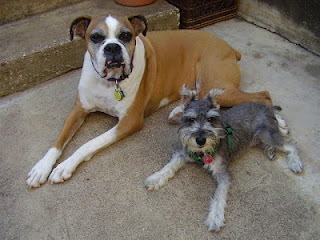 Once upon a time, there was a cute little schnauzer puppy living in a pet store. (Psst, that's Magoo! I hope I didn't give anything away.) Anyway, there was something wrong with him. He fell down a lot and kept running into things. My mom just think it's funny when I run into something, but the pet store thought he was blind. And they were planning to return him to the puppy mill he came from. That means he would've been put to sleep!

Lucky for this cute little puppy, he had a fairy godmother. A nice lady who worked at the store just happened to have a sister, who just happened to be none other than Auntie Sharon, LBR's founder, president, and beloved Pack Leader! The nice lady talked to her sister and mentioned that there was a dog in trouble begged and pleaded for her help, and Auntie Sharon folded like old laundry heroically offered to take him in.

So he came into foster care with LBR, and they named him Magoo after the cartoon character who can't see very well.

But then his foster home realized he could see perfectly after all! How strange. But he shook uncontrollably, fell down a lot, and threw up every morning. His pawsome foster parents took him to all sorts of vets and specialists for months. Finally, a neurologist decided that he had something similar to cerebral palsy in humans. It was a permanent condition, but he wasn't in pain and could still live a long life. And if LBR had anything to say about it, a happy one! 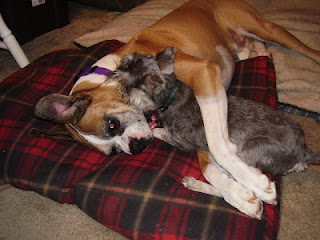 So he stayed in his foster home for a little while and learned how to cope with his condition and how to play with his foster brother and sister. And all the time he was looking for his perfect furever home. And guess what? 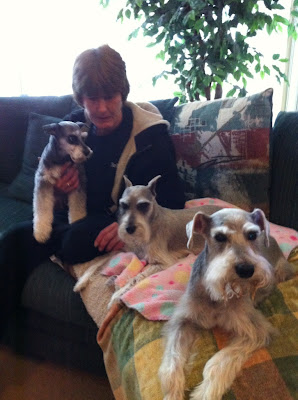 He found it!! And they all lived happily ever after. 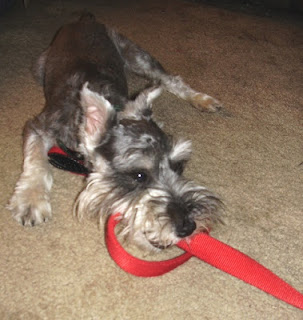