I talk about my sissy Cinderella (Cindy Lou!) a lot, but did you know I have a kitty brother and sister too?

This is Scribbles. He's the oldest in the family -- he's almost 14! -- and kind of a grumpy old man sometimes. But he was Momma's very first furbaby on her own, after she moved out of Grandma & Grandpa's house, so he's very special. 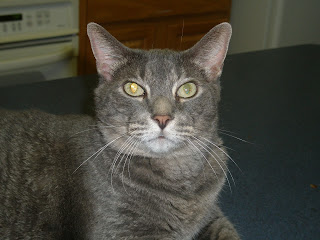 And this is Pigeon (or "Pidge"). She's very beautiful and sweet, but she's very skittish. 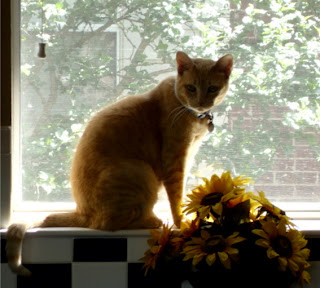 We had a bit of a problem when Momma first adopted me. See, boxers don't always get along with cats because we have a high prey drive. That means we like to chase things! Usually that's lots of fun, when we chase bunnies or birds or squirrels, but it's not so great when Momma wanted to have a boxer and not have her kitties eaten.  That's why she went to LBR in the first place, because she knew she could meet lots of boxers and find one that would get along with her kitties. So she got ME!!

Except, um, I spent the first few weeks like this: 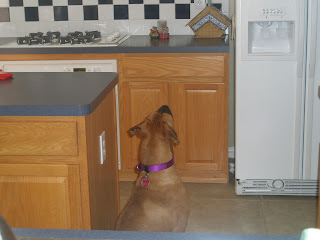 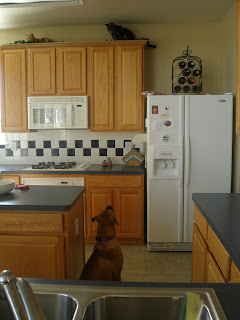 Hmmmm.  The problem wasn't that I wanted to eat the kitties, of course. They were my new brother and sister, and I loved them right away! I wanted to tell them how much I loved them... which was the problem! And they just didn't want to give me a chance. <sigh> 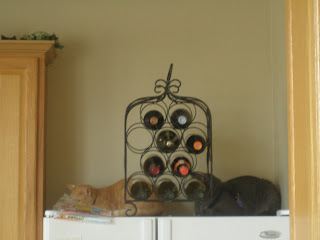 Momma said she worked really hard to find a cat-friendly dog, but she didn't think about starting with dog-friendly cats! 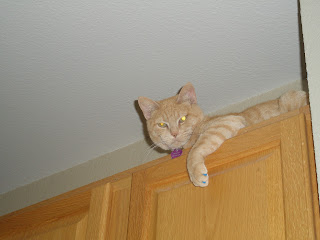 "Come down? There's a dog down there!" 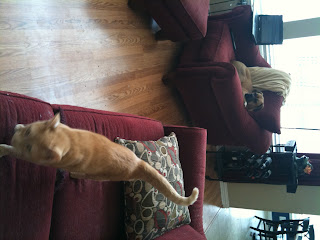 Observe the self-control. Must. Not. Pounce!

But you know what? After a while, it was worth it! Scribbles was the first to change his mind. He told me that he'd been boss of the household for a long time, and he wasn't going to let a silly dog ruin that! I don't mind if he thinks he's boss. I know Momma's really in charge, BOL! But we forged a truce and started hanging out to watch Animal Planet and stuff. 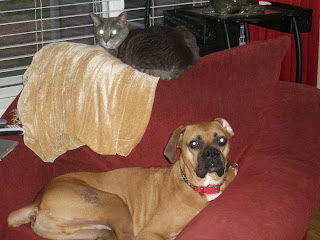 "Can you pass the popcorn, bro?"

Pigeon took a lot longer to convince. She spent about a year and a half after I first moved in hanging out on the cabinets! She finally started moving down closer, and finally she realized I'm not such a bad guy after all. 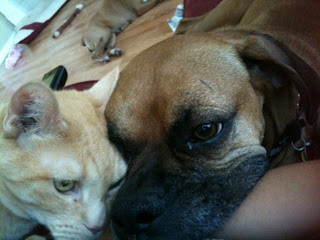 "I think you're a purrfect sister."

It's hard being siblings, especially when some of you are different species! But if you work really hard at it, it's SO worth it in the end!

Posted by Matilda the Boxer at 2:02 PM