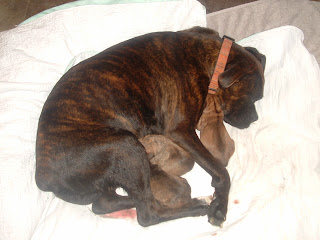 Isis had 3 of her puppies yesterday, but my mom starting fretting yesterday evening because she said there were two puppies that didn't want to come out. I don't get that, we have chicken jerky here! They should come out and have some with me!! Mom said the vets had to do something called a sea section to get the other two to come out. I hope they all got chicken jerky after that! Mom also says the sea section was really expensive, she said it was 2.5K, but I don't know what that is? It sounds like a lot of chicken jerky though!

Here's a picture of mom and the three babies that came out on their own. Aren't they cute?