Humans are SO silly sometimes! You know how sometimes you go out and have a nice time running and rolling in a nice big mud puddle? You're busy splashing and squishing away, and then suddenly the humans start shouting, "NO! BAD DOG!" and other annoying things? And on top of all the yelling and dragging you away from your fun, you usually have to have a BATH on top of it! Oh, it's enough to make any good dog's blood boil.

Well, after ALL the fuss they kick up about it, it turns out... some humans like to run in the mud too! 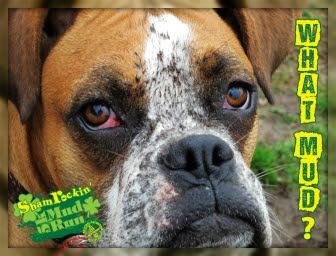 There's this event called the Shamrockin' 5k Mud Run, and humans PAY to go run around in the mud. Can you believe it?! I'd be a lot more angry about it, except the pawsome humans who are running it chose LBR as their 2013 charity! That means LBR will be getting a donation from their registration fees, plus we'll have a booth set up at their runs. How exciting!!

The Shamrockin' 5k Mud Run will be held on March 9th is in Flower Mound, starting at 9am. So if you're local, sign up and get a little dirty to help the dogs! BOL! And if you can't make this one, they'll be having three more events this year -- in May, July, and October -- so hopefully you can make one of them! 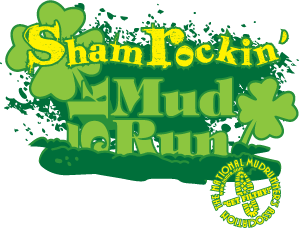 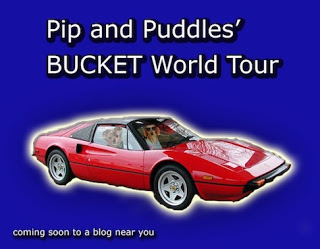 Don't furget to tune in tomorrow fur some VERY SPECIAL GUESTS here on the Chronicles! Pip and Puddles will be swinging through Texas on Pip's Bucket List World Tour. Just wait till you see everything they get into here! 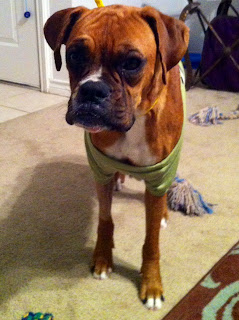 Yup, Dublin is feeling LOTS better and gots to go home from the V-E-T! She's still weak, but she's starting to eat better. Silly humans -- I could've told them that all she needed was a cheeseburger! 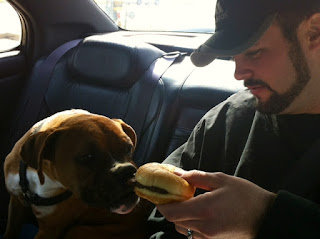 Dublin says thanks for the POWER OF THE PAW! She knows it helped her a whole bunch. I'll keep you updated on her search for her furever home. As you can tell, she already has her foster daddy wrapped around her paw!
Posted by Matilda the Boxer at 8:00 AM