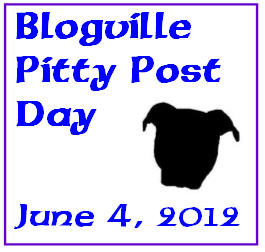 Today is my buddy Corbin's third birthday! And as his birthday pressie, he wants something very simple: humans to stop discriminating against his breed. See, Corbin is a pit bull. Some people would think just because of his breed that he's a mean, scary, vicious dog. But he's very sweet and friendly, and I'm proud to call him my furiend! So today, Blogville's posts are dedicated to pit bull awareness, in hopes that one day pit bulls won't be judged just by their breed. 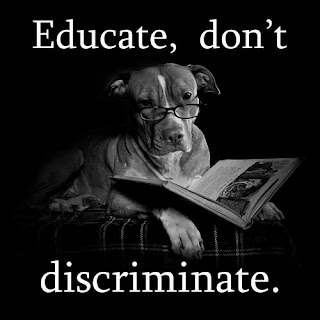 Momma and I always say that you have to learn all about something before you can understand it. That just makes sense, right? So when people tell you that pit bulls are bad and scary, what can you tell them?
Wow, pretty amazing, huh? I feel proud to have pit bull furiends!

Dog attacks are really dangerous and scary, and I don't blame anyone for being afraid of an aggressive dog. I've had some pretty scary moments myself with unleashed dogs! But pit bulls aren't "genetically predisposed" to attacking humans or anything stupid like that. They're dogs. Some dogs are bad, and some dogs are abused and neglected and trained to be aggressive. That's their humans' fault, and it makes me want to bite to think about it.

Humans are really strange sometimes. They pick a breed and decide it's the scariest thing ever. But then after a while, they realize that breed isn't so bad after all. Then instead of realizing that maybe it's just individual dogs that are scary, they move on to another breed! It used to be Dobermans, then Rottweilers, then German Shepherds. Now it's Pit Bulls. But tomorrow it could be Boxers, or Labradors, or any of us. When you let ignorance stand, we all lose.