Friday Dog of the Day: Winston 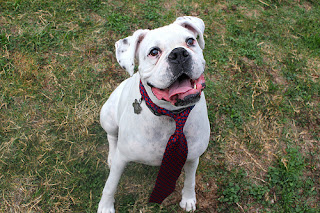 "Hi there, folks! Winston's the name, pleased to make your acquaintance."

Winston is a 7-year-old white boxer boy looking for the pawfect family to call his own. He had a family once before, but they decided they didn't want him and left him to fend for himself. Luckily he ended up with LBR! He's a very happy, go-with-the-flow kind of guy, so he settled in quickly and started looking for his furever home. 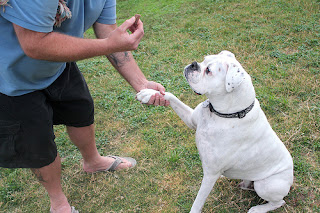 Remember how I said he's super-smart? Look at that sit-shake! Such form, such focus. I'm in awe. He also knows how to only potty outside, since he's a distinguished gentleman already, and he's great in his crate! He does well with kiddos -- his whole face lights up when he sees them -- but since he's a big guy who likes to romp, he'd do best without very little kids he might knock down. But he loves to play with toys and is a champion fetcher, so some older kiddos he could chase around the backyard would be just pawfect for him! 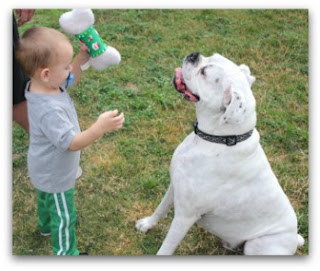 Winston is also great with other dogs! He's always lived with other dogs, both in his foster home and before, so he knows how to be part of a pack. He'd do okay as an only dog as long as you have time to spoil him lots, but he'd love a brother or sister to be silly with! 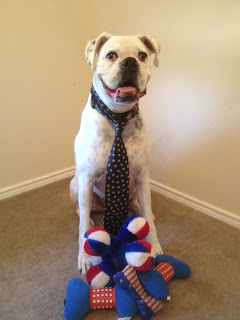 "I've had my own Independence Day already. I'd rather become part of your family!"

Winston is just the total package! I know he'll find a grreat home soon. If you think it should be with you, maybe you should check out his bio page on our website! You can learn all about him there, then fill out your application and bring a little Winston into your life. 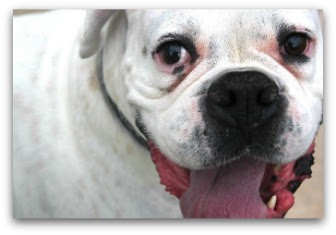 "I'll be your best friend!"

Posted by Matilda the Boxer at 8:32 AM