LBR's about to have PUPPIES!!

Since LBR is a rescue and supports spaying and neutering, we obviously don't get many litters. But sometimes a poor pregnant momma will find herself in a shelter needing help. And LBR springs into action! 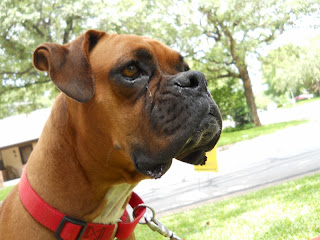 This pretty little lady is Dallas. She was rescued a few days ago, but once she got home, her foster momma started thinking there was something a little strange. She thought maybe Dallas was in heat, but when she went to the v-e-t, he said, "Guess what?!"  Yup, she's having puppies! The v-e-t saw two skulls on the x-ray, so it doesn't look like a big litter. We won't know if they're all boxer or not until they're a few weeks old. But they should be making their grand appearance sometime this week! 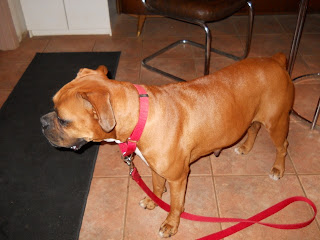 Everybody wish Miss Dallas good luck bringing her precious cargo into the world. I'll share news and pictures when I have them!

PeeS: We're trying to decide what the litter theme should be. Our pups are always given a litter theme associated with the mom's name. Like when Sushi had puppies, we called the litter "the Wasabis" and they were named Tuna Roll, Saki, and Maki.  We were thinking maybe we could use Dallas suburbs for this one, or maybe Dallas sports teams (Stars and Cowboy?), or maybe names from the Dallas TV series (J.R. and Bobby?). Let me know if you have any good ideas!
Posted by Matilda the Boxer at 8:00 AM