You know, the good folks at LBR have been doing rescue for so long that we start to think we've seen pretty much everything. Then something new will come along that will have us all scratching our heads and saying "Huh?"

This handsome guy is Boz. 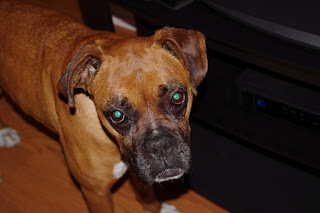 Now, you'd never know it to look at him, but he has a medical problem that made all of us go "That can happen??" His foster parents noticed he was having a hard time eating, so they took him to the vet. The vet checked him all out and figured out the problem -- he doesn't have a tongue! I know, can you believe it?! He just has a stump of one. We don't know how it happened.

I bet everyone's wondering what we were at first -- "so, um, how does he eat?" The answer is slowly and messily, but he can do it! See, his foster parents even made a video to prove it.

Boz definitely has a lot of struggles in life. But now that he's with LBR, things are going to be a whole lot better for him! He'll always have a hard time because of his tongue, but he's settled in at his foster home and is doing just grreat! He loves to play with his foster brother.

So never try to say you've seen it all. The universe will find something really weird to prove you wrong!
Posted by Matilda the Boxer at 8:13 AM