Hey everybody! As you know, my mission in life is to share stories about how incredibly PAWSOME the dogs of Legacy Boxer Rescue are. That's not tough, because we have some pretty darned amazing dogs here. Today's story could go in a comic book, because it has a superhero in it. Say hello to LBR alum HOMER! 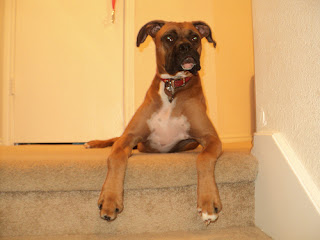 It's a bird, it's a plane, it's Super Homer!
Here's a story one of our LBR volunteers shared yesterday in honor of Homer's one-year adoptiversary:

"Since today is Homer's adoption anniversary, I thought it would be the perfect day to tell you all just how special Homer is. He is literally a life saver and I'm not talking metaphorically speaking either.....

As many of you know, back in November, my husband Eric had a heart attack. What most of you don't know, is that if it wasn't for Homer, Eric probably would not be here today. Eric firmly believes, and I agree, that Homer saved his life!

Eric and I had gone to do some work for Melanie, Homer's mom. Eric was going to do some landscaping and I was house cleaning. When we got there Homer and his brother Shankly greeted us in the usual boxer fashion, nubs going like crazy, lots of kisses and jumping all over the place! After the initial greeting they both seemed to calm down and were quite curious to see what was going on. Melanie showed us both what to do and we both began to do our thing. Homer and Shankly were outside, watching Eric and doing their own thing. After a little while, we noticed that Homer seemed to be barking a lot. So Melanie brought him inside. As soon as he was in the house, it was clear that he wanted back out. Melanie told him no barking and let him back out. Wasn't a few seconds and he was barking again. This went on a couple of times. He would start barking, Melanie would let him in and then he would let her know that he wanted back out quickly. Soon after this, Eric came in the house. He was sweating profusely, so I thought he had done too much too quickly and was over-heated. He said he wasn't feeling well and needed to sit down. Homer was still barking a bit, and it was clear that he was barking at Eric.

But it wasn't a nervous bark, or the bark you hear when a stranger approaches. As he barked his nub was going a mile a minute. It was almost like a play bark, but not a play bark. At first, I wasn't really all that concerned about Eric, I was still under the impression that he had just over heated. I remember telling him to just sit for a few minutes and he'd be fine, as I went back to my cleaning. After a few minutes, Eric looked much worse and when I touched his forehead to wipe of the sweat, instead of it being hot from over-heating, he was ice cold. He then told me that his heart hurt and he couldn't feel his arms or legs. With Melanie's help, and Homer following, barking away, we got Eric to the truck and rushed him to the hospital. He was admitted immediately and was in the cath lab in less than an hour having a stint put in and a clot removed.

After he woke up he told me how it wasn't long before the pain started that Homer started barking at him. Eric said that Homer would get right next to him, nub going a mile a minute and then he would start to bark like crazy. At one point the pain got really bad and Eric sat down in a chair that was in the yard. He started to pass out, and at that point, Homer again started barking and proceeded to start licking Eric's hands and arms, and then he climbed on Eric's lap and began to lick his face, bringing Eric around a bit. It was then that Eric knew he needed to get into the house and get to us. If Homer wasn't outside and wasn't barking or licking Eric, Eric probably would have died right there in that chair. Eric tells everyone that it wasn't just the doctors that saved his life, it was Homer too! He believes that if it wasn't for Homer, he wouldn't be here today.

So today we want to say, "Thank you Homer! You are an absolutely amazing dog. It is because of you that Eric is still here and we are still a happy family!"

Big hugs and kisses to you Homer! We love you!!" 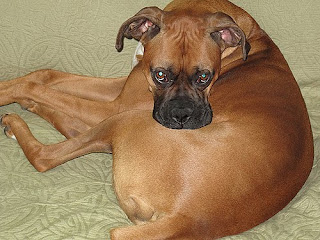 Gosh, little old me? I'm blushing!
Aww, and he's modest too! Thank you, Homer, for saving Eric's life and showing everyone what an amazing dog you are!
Posted by Matilda the Boxer at 8:33 AM