Okay, folks, I like to joke around a lot with my PSAs, but this one is really serious.

Make sure your humans can recognize the symptoms of gastric bloat and know what to do!! 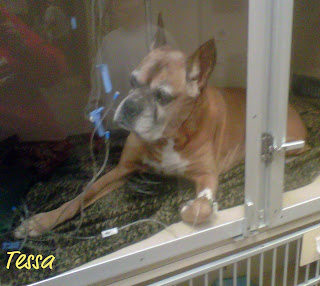 This is LBR foster Tessa at the ER this morning. She had a very scary night, for her and her mom! She developed gastric bloat (also called torsion), which is where the stomach twists and traps all the air and gases and stuff inside it. When that happens, there isn't much time to act! My furiend Cubby had bloat a few years ago, and his vet told his moms that they basically had an hour from the time he developed it to get him into surgery. That's not much time!

What's really scary is that no one quite knows what causes bloat. It's most common in the large, deep-chested breeds, like boxers, Great Danes, and Akitas. It's more common in males and older dogs, but not exclusive. (An LBR volunteer lost her 3yo female Great Dane to bloat a few years ago.) Some vets think it can be caused by eating your food too fast and exercising (playing) too hard immediately after eating. But sometimes it can seem to come totally out of nowhere, and that's why it's so important for your humans to recognize the signs.

The biggest sign of bloat is a swollen, distended stomach. (Cubby's moms said his felt like a bowling ball!) Also if you're trying to vomit or potty but can't get anything to come out, plus being restless and weak. My mom feels my stomach regularly to make sure she knows what it feels like and can recognize if anything's wrong. (She's worried because I'm male and extra-deep-chested, so the older I get the more careful she is!) If you notice these signs and even think it could be bloat, don't waste time! Bloat can kill in an hour (or less!) if it's not treated, so please go to the vet and get checked out. 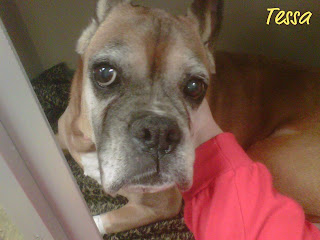 Tessa got through her surgery okay and is recovering now, but since she's a silver belle, it's harder for her to recover than a healthy young pup like me. I know she could really use some good thoughts and prayers to help her get better quicker. (And if you have some extra green papers, I know emergency surgery is super-duper nasty expensive. You can donate to LBR to defray some of the costs.)
Posted by Matilda the Boxer at 8:00 AM