Until we meet again

It's too soon. Not just too soon after losing Jessie. It would be too soon if it was next year, or in ten years from now. It will always be too soon to lose a dog like Casey, because he was the best dog. I loved all my pets, and I've mourned for losing all of them. But sometimes you're lucky enough to get a dog who's more than just a dog, who becomes absolutely a part of you. Your doggie soulmate. Casey was all that and more to me, and nothing short of my whole life is long enough to spend with him.

I fell in love with Casey the moment we met, one cold December night in 2008, a bright blue scarf tied around his neck. He smiled at me, and then he licked my ear, and we belonged to each other immediately. It wasn't all roses -- the cats took a long time to forgive me, and Casey caused all the mischief that a teenage boxer is going to cause. He was so smart, learning how to get out of his crate no matter what and even mastering the Doorknob Principle to open doors on his own! This earned him the nickname Houdini. I tried everything to keep his crates inescapable. I don't feel like I succeeded so much as he just decided that he would humor me and stay inside if I wanted him to. Casey trained to be a therapy dog, but he just loved life and was so exuberant that he couldn't quite master the final temperament test. But I didn't mind, because that led me to start fostering with LBR instead. Casey was the BEST foster brother and had a knack with helping new dogs find their feet in our house. I know that many of his fosters siblings are going to be welcoming him to the Bridge with enthusiastic jumps and barks.

No matter what he did, Casey touched everyone he met. He became an LBR ambassador by writing the blog for LBR, where we both met some lifelong friends who made a big impact on our lives. He loved going to LBR events, whether a home visit or gift wrapping at Barnes & Noble, because he would invariably get fussed over by everyone. In addition to being a good foster brother, Casey was an amazing brother to his siblings here. Cinderella and Jessie both came to us as fosters, and it was Casey who let me know that they were at their forever home. They played and snuggled and slept together. The kitties weren't his fans at first, but he never stopped trying to convince them to let him love them. Eventually both came around, and I treasure the moments of them snuggling together. Cinderella, Jessie, and Scribbles are going to be so excited to meet him at the Bridge and snuggle with him again! I picture them all running around together and can't help smiling through tears.

But most of all, Casey was his Momma's boy. We had a bond that I've never had with any other dog, and I know I won't have with any dog in the future. He's always been happiest when he can snuggle with me, no matter where we are. He loved going on walks, his head up and eyes bright as he looked for anyone who might come by to say hello. Even in his young and wild stage, he still loved best to cuddle up to me on the couch, watching TV or playing on the computer. It didn't matter what we were doing, as long as we were together. He was my Handsome Man, my baby boy, my Casey. Helping him over the Bridge was the hardest thing I've ever had to do, but I owed it to him to not let him slowly lose what he was until his dignity was gone, he was in pain, and there were more bad memories than good.

I still can't picture a world without Casey. It doesn't seem right that such a world should even exist. One day, my handsome man, we'll meet again. Until then, watch over me from above and remind me you love me in my dreams. <3 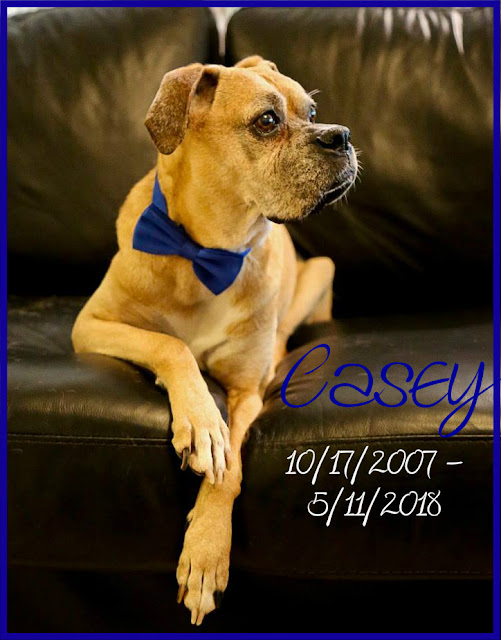 Posted by Matilda the Boxer at 3:30 PM