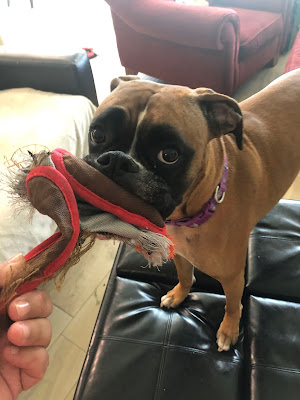 Furst his legs disappeared. Then his head. Then all his innards! The last time Momma and I played tug with him, he was making this weird riiiiiiip sound instead of squeaking. Now I can't find him anywhere. I was also playing with my trusty Yellow Ball last night, and he stopped squeaking too. I tried some surgery to figure out what was wrong with him, but Momma took him off to recovery just after I got the hole open.

But THEN the magic happened! 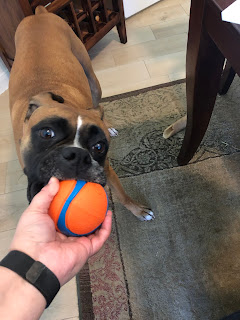 Look at my Orange Ball!! Orange Ball magically showed up in my toy box yesterday, along with Yellow Ball AND his twin brother, plus Banana, PLUS Piggy! Momma said something about busy boxers being good boxers. Whatever. I LOVES Orange Ball so very very much, and all the other guys too. I've been playing with them all since they magically appeared, but Orange Ball is my favorite. And he never gets tired of playing like Yellow Ball used to. Momma used to take him away just when we were getting REALLY squeaky and say it was his nap time, but Orange Ball is the strong silent type. I guess he doesn't need naps. How fun!!

Do your toy boxes ever magically produce new toys? I'm going to have to start checking mine more often!
Posted by Matilda the Boxer at 7:00 AM