OMD, folks, Jessie here! I discovered the most pawesome thing yesterday -- nature's squeaky toy!! For some reason, Momma didn't get any pictures of this, so here's a kinda reenactment. Ish. 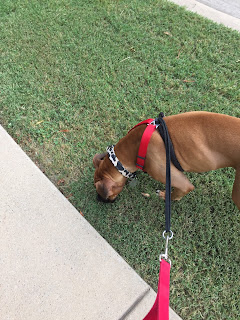 So there I was, playing in the back yard last night, when I caught a sniff of something totally amazing. I went to hunt it down. And guess what I found?? 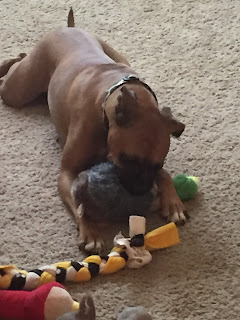 A teeny tiny little squeaky toy!! It looked JUST like the bunnies I see running around the neighborhood, but it was TINY. And when I tried to pick it up, it SQUEAKED! OMD, I didn't even have to chew on it! This was amazing!! So I jumped around here and there, trying to get a better view of it, and it kept squeak squeak SQUEAKing! Then, just as it was getting really fun, Momma had to RUIN it all. All of a sudden she shows up, starts moaning "Not the baby bunny!!" and grabbed my collar to pull me away. The NERVE of her!! It was still squeaking and running around. I didn't even get a chance to find out if it had fun removable stuffing like my other toys. 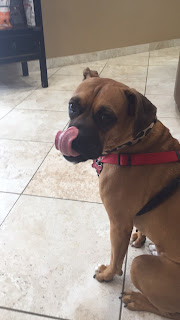 I'll get it next time!


Momma's note: I heard a squeaking last night when Jessie was outside playing and thought she'd taken one of her toys outside. I went out to check, and she was dancing around trying to get at a teeny tiny baby bunny (smaller than my palm!) that was desperately hiding at the base of the bushes. Jessie never actually got a hold of it. Hopefully the baby bunny realized was a stupid idea it was to be in this yard and left.
Posted by Matilda the Boxer at 9:07 AM