Sad story, with an LBR ending

I have a sad story to share with y'all today, but you know it has to have a happy ending because LBR got involved. It starts off with a Good Samaritan who contacted us, asking for help about two boxers. Here's what she told us:

The two boxers I'm speaking about are mother and daughter. They are living down the road from me and have a very sad story. The mother, father and child were all living together until Father's Day this year. My husband and I drove by and saw one of them on the ground looking very stiff. We stopped and saw that the mother & father were tied up on very heavy log chains which became crossed and neither of them could get to water or shade. The male had died already and we let the mother off the chain just in time to get her to water. The puppy was running around and without water too. I called our local county sheriff's department and they did nothing. I called the local shelter and they said they could not do anything about it because it's outside the city limits. I've continued to monitor this sad situation until last night I could not stand it anymore. My husband and I took an extra wooden dog house we had and blankets over to the home. The owner was not there but we saw how poor the overall condition of these dogs was. The mother is skin and bones. The puppy is covered in mange and her feet are double the size they should be. There were also the bones of the father dog scattered throughout the yard (remember he died back in June). I saw his spine and pelvic bone...very disturbing!! I know where the owner works so I called her today. She said she is in the process of moving and left the dogs behind because a puppy of hers was poisoned at the new residence (this is a different puppy from the boxers). She told me that she's trying to find someone to take the two boxers since she has no where to put them and doesn't want them to get poisoned.. She said the mother dog is about 3 years old. 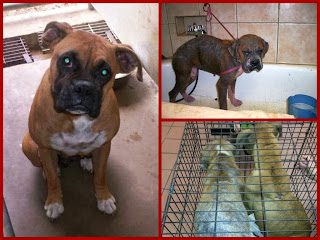 We felt so bad for poor Daddy Dog, dying of thirst and being just left out there. :~~( We couldn't get Momma Dog and their baby out of our heads, so we sent out an URGENT plea for a foster home to take them. And guess what? 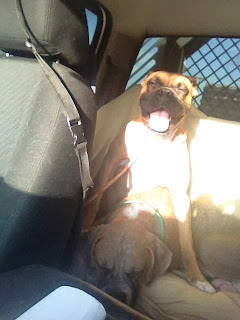 How's that for a totally pawesome smile?? Momma Dog was so relieved to be going to safety and making sure her little girl got a good life too. 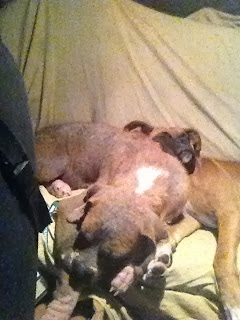 They're busy dreaming of the good life to come. I'll share more pictures once they're in their foster homes. Welcome to the LBR family, precious ones! We'll never furget Daddy Dog, and we'll take good care of his girls in his honor.
Posted by Matilda the Boxer at 1:20 PM