I know you're not supposed to talk about a lady's weight. But I don't think she'll mind sharing this one. 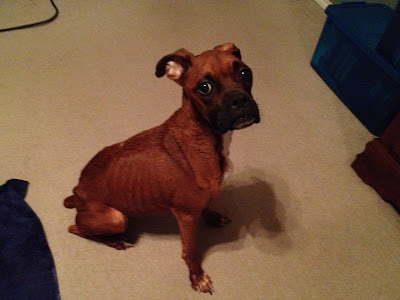 Sweet Dolce has gained 5 whole pounds in her first week in rescue!! Way to go, sweet girl! You'll be back to fighting trim in no time!

Some folks were asking me if she's going to have health problems because of being so starved. It's possible that she'll have organ damage from it, but there's really no way for us to tell. She'll either start to show signs of it or she won't. So we'll fatten her up and let our dogtors look at her a whole bunch, and in the meantime we'll cross our paws for her! I've known a bunch of dogs who were pretty badly emaciated and are totally healthy now, so I think she has a good chance!
Posted by Matilda the Boxer at 8:00 AM