Sorry I've been quiet for a bit, guys! I've been busy patrolling the house and keeping an eye on all of my Legacy cousins. We've had a couple of hard cases lately, and I wanted to make sure they were doing okay. I want everyone to say hello to my buddy Patches. 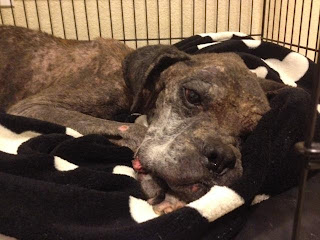 Now, he may look pretty bad there, but he's actually doing a LOT better than when we first got our paws on him! He and his two sisters all had really bad cases of mange, a skin infection where you lose your furs and get all itchy and yucky. I had mange when LBR first found me, and it's no fun at all! Patches had the worst case of the three, PLUS they were all really emaciated, and he had a big nasty sore on his hip that we don't know where it's from. Here he is when he first came to his foster home. 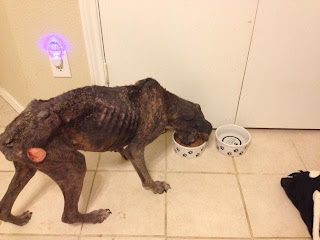 As you can tell, he definitely has a long way to go! He's one medication for his mange and is getting lots of food to put some meat on his bones. And lots of baths! I wouldn't enjoy that last one, but I remember how good nice, gentle baths and massages felt when I was getting over mange and had all that yucky flaky skin, so I know Patches is really enjoying it. 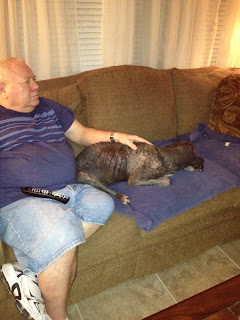 Patches has settled into his foster home and really loves his foster daddy. As you can see, the feeling is mutual! His foster parents call him "Patch Man," and he loves following his foster daddy wherever he goes. This weekend, they watched lots of football, and Patch got to share the popcorn! 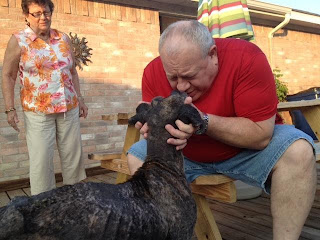 Keep your paws crossed that Patch keeps recovering and gets all healthy and furry again. But I don't think you have to worry about whether he'll find himself a furever home. Something tells me he might already be there. :)


PeeS: Don't worry about Patches's sisters! They got saved too. They're just with another rescue. Here they are getting their ride to freedom. 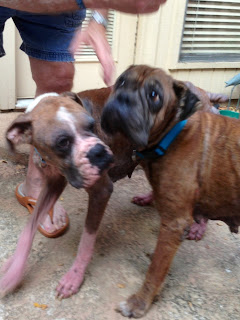 Posted by Matilda the Boxer at 8:46 AM