Gather round, pups and kits, Uncle Casey has a very special adoption story to share with you today! I want you to all say hello to Einstein! 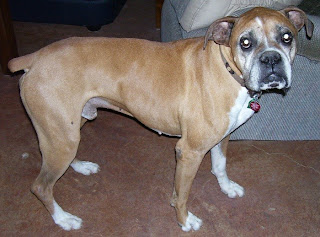 Isn't he handsome? Einstein was an LBR foster dog back even before me! He lived with his foster family back in 2007 for two and a half months. He was underweight when he came to them, but they got him up to a healthy, happy, bouncy 8-year-old boxer boy. He loved to "talk" to his pawrents and snuggle with them. He went to one pet fair to look for an adoptive home . . . but then after that, he suddenly started drop weight and act sick, and no one was sure what was wrong. Six years ago yesterday -- July 1, 2007 -- he passed away in his foster home.

Well, even though they've moved on to other things and live far away from LBR, they've never forgotten their special guy. His foster momma said that they always considered him their dog, but they never formally adopted him. She always said it was too late, but then she realized that it's never too late. So yesterday she filled out Einstein's adoption contract and check and sent them in to LBR.

And now Einstein is wiggling like crazy up on the Rainbow Bridge, knowing that he has a forever family to meet again someday. And that, folks, is what LBR is all about.

PeeS: I also want to say a very sad farewell to my furiend Thunder from the Chronicle of Woos. Please keep  his family in your thoughts today! 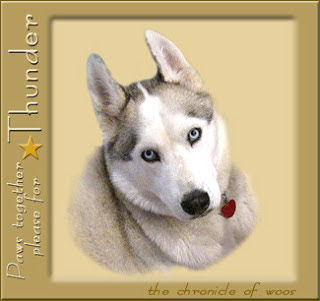 Posted by Matilda the Boxer at 8:48 AM