That's right, it's Foster Friday! That means it's time to meet one of the pawesome foster dogs availalbe for adoption through Legacy Boxer Rescue. Everybody say howdy to my new buddy, Tex! 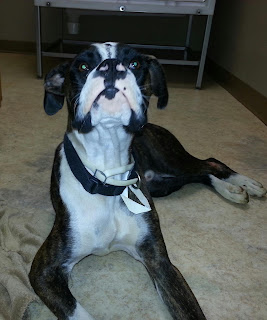 Tex is around 9 months to a year old. Isn't he just about the handsomest devil you've ever seen? (Except for yours truly, of course!) He's had a pretty ruff start in life, though. He came to LBR's attention after he turned up at a local shelter, appearing to have been hit by a car. He had a lot of abrasions, but worst of all, he had a broken femur and another break right where the hip meets the back. Ouch! 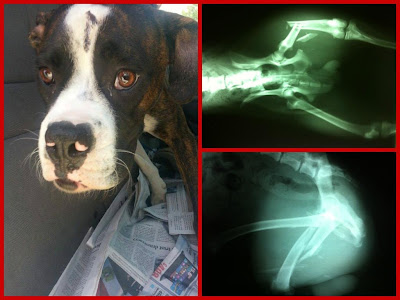 Tex was going to be put down by the shelter if a rescue didn't step up for him, so LBR jumped into gear! He's spent the past few days chilling with the V-E-T, and today he's going to have surgery to repair the two breaks. Our dogtor thinks he'll be able to lead a normal life after this, so let's get him taken care of!

You can go here if you want to see Tex's bio or make a donation to his care. Good luck, Tex! 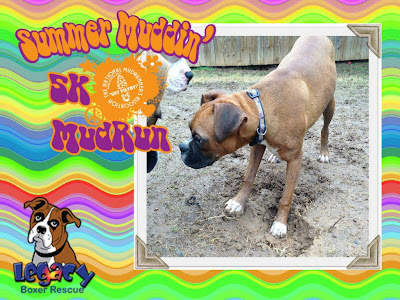 Okay, so even though WE get yelled at for running in the mud, humans do it on purpose and it's fine. Whatever. TNMRA is having their third Mud Run for the year TOMORROW, and LBR gets a share of the proceeds! My momma is going to be out there volunteering, and she promised to take pictures for me. We'll have some LBR foster dogs out there to show everyone what they're running for and give celebratory kisses, and maybe some LBR volunteers will be running! (Momma ran in the March race and says she'll run the October one, but she's just volunteering on this one.) Good luck, Mudders!
Posted by Matilda the Boxer at 8:23 AM