You know, I think all the folks at Legacy Boxer Rescue pretty well rock. They saved me, after all, and a whole bunch of other handsome boxers like me. But every now and again, they do something that just makes me really, really proud to be their ambassador.
I want to introduce you to a really special lady. This is Charity. 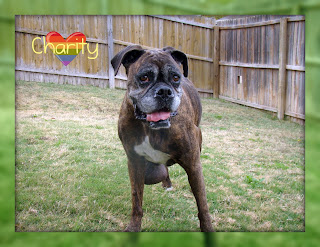 Do you see that weird-looking thing behind her right leg? That's a H-U-G-E tumor! I don't know how she even walks with that thing on! I know that boxers are prone to tumors, but that's just ridiculous! Here's a video of her so you can see it better. YUCK!

Pretty miserable, huh? Well, her last humans let her get to that point, and instead of doing anything to help her they just dumped her at the shelter! She was really miserable there, and she was going to be put to sleep just so she wouldn't hurt anymore.

Well, that's when the pawesome folks at LBR stepped up! One of our volunteers went to pick her up just so that she could have an afternoon of cheeseburgers and love before being helped to the Rainbow Bridge by one of our vets. But then another of our volunteers said, "Wait a minute! This girl's got spunk!" They thought she deserved a chance to fight it out for as long as she could, so they agreed to take her as their very own foster for however long she has left. 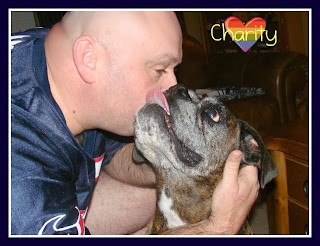 So now Charity is a Legacy dog, and that means she's part of our family forever! She has a foster home that will love her and take care of her for as long as we can. She's never going to know what it's like to be scared and alone again. And that's why LBR people are the very bestest humans anywhere in the world. 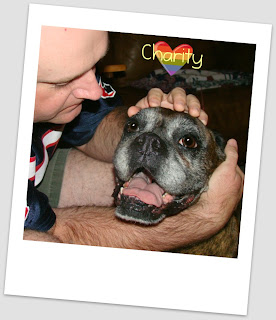 Charity is going to the vet today to get that nasty tumor looked at, plus a bunch of other ones she has too. Please send her lots of warm fuzzy thoughts that everything goes well. I know that now she's found out what it's like to be part of the Legacy family, she wants to be in it for as long as she can. We love you, Charity!
Posted by Matilda the Boxer at 9:58 AM