We love you, Jessie 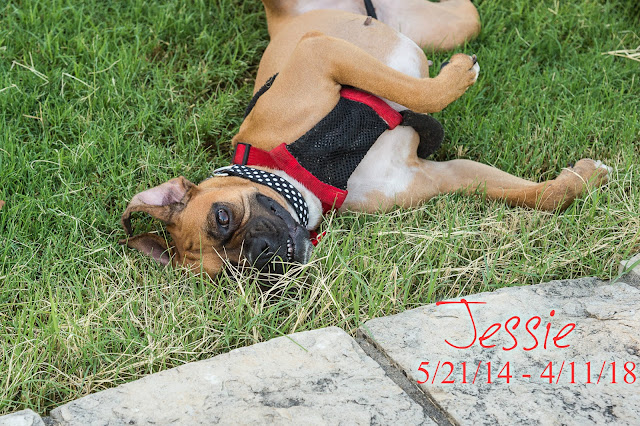 Three years ago, I decided I was ready to foster again after losing Cinderella. JUST foster, though eventually I'd be open to adopting the right pup. Well, the foster I selected was picked up by a temporary foster mom and taken to our president's house to get a collar and LBR tag. As Jessie licked Sharon's face off, she made the prediction that "this dog is never going to leave Andrea's house!"

Of course, she was right. Jessie galloped her way straight into my heart, with her mile-long, non-stop tongue, her big grin, and her expressive face. I took so many pictures of her just sitting or lying down because she packed so much expression into it. She loved to roll around on her back in the grass, something that reminded me of my sweet Cinderella. She and Casey got along immediately, chasing each other and playing like they'd been friends forever. And somehow she eventually won over my little scaredy cat Pigeon, who suddenly realized that having a sister could be a GOOD thing. They snuggled together and played in a way I've never seen a cat and dog interact before. They truly loved each other.

Jessie was the most lovable goofball you've ever met. Everyone who met her loved her. You just couldn't resist the force of her personality! I always said her only flaw was that she couldn't control her licker -- she loooooved to kiss and would go to any lengths to just cover you in kisses. If I pushed her away, she would just keep licking the air until she was satisfied! She had wonderful puppy energy, bouncing and bounding everywhere. She was either moving at full speed, or she was sprawled out in full snuggle mode. There was no in-between!

Jessie was only a year and a half when I found out she was already in kidney failure. She had a congenital defect, and there was just nothing to do other than try to control it as best we could to prolong her life. I think maybe she was so energetic all the time because she knew she'd only have a limited time to pack everything in. Even after her diagnosis, you'd never know she was sick most of the time. She was still happy and energetic and loved life. When she lost that energy, I knew it was time to help her from her poor little body that couldn't keep up anymore. I think the first thing she did when she got to the Rainbow Bridge was run up to Cinderella and they both rolled in the grass with their paws waving.

I will miss you so much, Jessie girl. Thank you for making my life so much richer in the short time I was blessed to have you. It won't be the same without you. Casey and Pigeon miss their little sister so very much. I love you. <3