My furiend Mayzie had a wonderful post yesterday about one of her family's holiday traditions -- ornaments on their Christmas tree for every pup and kitty in the family. I thought that it would be fun to talk about our different holiday traditions.

So to kick things off, I'll also talk about our Christmas ornaments. Momma loves loves loves ornaments and collects them to commemorate all sorts of different things that happen to her during the year, like going on a trip or starting a new hobby. Of course, that means there's a new ornament for each new member of the family! 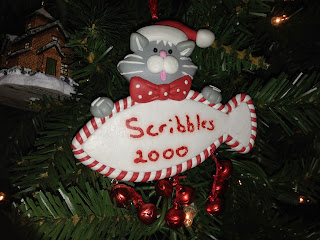 The very furst one of us who joined the family was Scribbles. He and Momma lived in a little apartment in Chicago and didn't even have a tree, but Momma hung their stockings on the heating vent. Later, she found this ornament that looked a little like him. 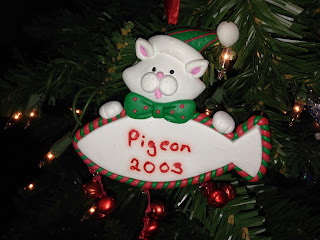 Pigeon was next! She and Scribbles got their ornaments at the same time, can you tell? That was after Momma finally had enough room for a Christmas tree. 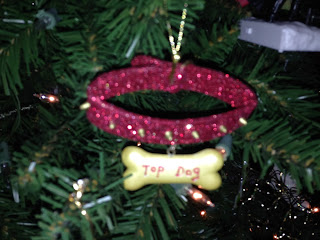 Whose ornament could this be but mine? I am TOP DOG around the house, after all! The other side of the bone has my name and 2008 written on it, since that's the year Momma adopted me. She adopted me in December, so when I came home I already had an ornament on the tree and my own stocking! 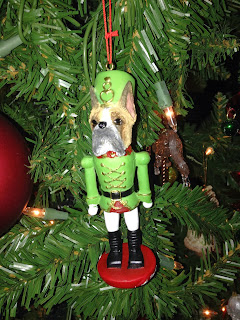 This ornament helped Cinderella become part of our family! Momma was on a business trip back when Cinderella was a foster dog. She'd been thinking about adopting Cinderella for a long time, but she kept arguing with herself about whether it was the right thing to do. She wandered into a store that sold Christmas ornaments, looking for one that would represent her trip. Instead, she found this one that looked exactly like Cinderella. So Momma bought it and adopted Cinderella after she got home! It has her name and 2010 written on the top of the hat.

Finally, since I've mentioned our stocking a few times, I thought I'd show them to you! 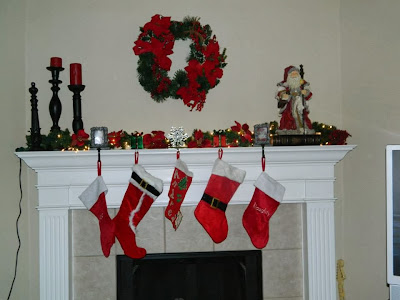 Momma's is the little bitty one in the middle. Grandma made it for her, so she won't replace it with something bigger. Mine is the Santa belt one just on the right, and Cinderella's is the fancy lady boot on the left. Then the kitties are on the outside, Scribbles by me on the boys' side and Pigeon's by Cinderella's on the girls' side! For some reason, Scribbles's stocking is always turned where it says "naughty". Hmmmm.
Posted by Matilda the Boxer at 8:00 AM