Momma did it again!

Sheesh. You know how when you're just starting to get a really good mud wallow, and the humans start yelling at you and usually make you take a B-A-T-H? And then if you rinse off all that yucky soap by taking a fresh dip in the mud, they get really mad? Yeah, well, apparently this is a rule with double standards. Look what Momma was doing yesterday. 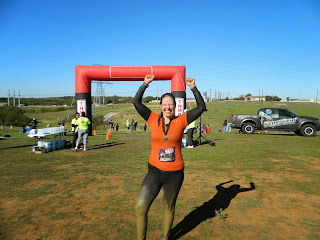 I would've gotten in SO much trouble if I got that muddy, but she had people cheering for her instead! What is UP with that??? See, yesterday was something called a "mud run." There's this place called TNMRA that hosts mud runs every year near us, and this year LBR was their chosen charity. So LBR set up a table at every run, and we got a dollar for every single registration fee. 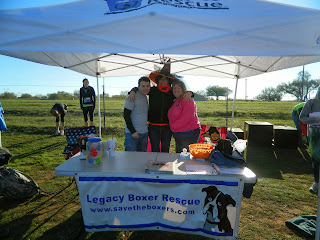 LBR volunteers working the table, with Pack Leader Sharon in the middle

Unfortunately, it was a really COLD day, so Momma was muttering lots of words that she really wasn't supposed to say when she was getting ready. She said she was shouting them when she was actually running. As punishment, she got squirted with water in a big hose. I hope she's sorry about it! 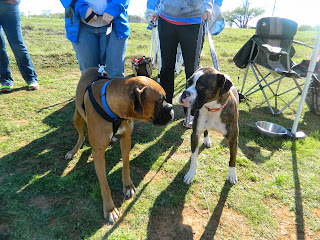 But I'm very proud of her hard work. It was a ruff run, especially with it being so cold. She said this one was a lot tougher than the first mud run she did back in March. But anything is made better if you have zombies show up in the end and do a Thriller dance. 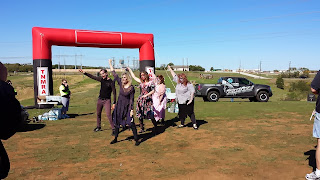 
PeeS:
A very fond farewell to my dear furiend, Mr. Pip. I'll never furget our time together in Texas on your blog world tour, an dhow you were always willing to help out a new pup in Blogville. Run free at the Rainbow Bridge, buddy! You can have all the cheeseburgers you want now.