Thanks to everyone for all the nice responses to my post about my sissy Cinderella. She's getting a big head with all the things people were saying about her! But that's okay, I think she deserves it. :)

Today I'd like to talk about another sweet little silver belle. Her name is Sofi. 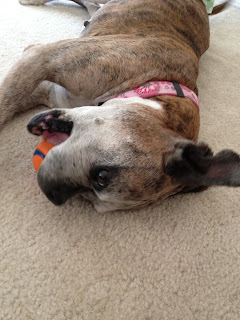 Isn't she just bee-YOU-tiful?? I love those silver-faced gals. They've seen so much of life, and they're so sweet and loving. Sofi is what we at LBR call a Keeper. That doesn't just mean that they're incredibly pawsome, because all LBR dogs are! No, a Keeper is an LBR dog that can't be adopted out. Usually it's because they have a serious medical condition, but sometimes it's because of a behavioral problem that means we can't adopt them out to another home.

Sometimes we know when we bring a dog into LBR that it will be a Keeper, but sometimes we don't know until they have some tests done and we realize that they're very sick. What I think is so amazing about LBR is that they keep all these dogs as long as they can and give them all the same care they give to an adoptable dog. Some places would just euthanize these dogs as soon as they realize they can't be helped, but LBR thinks that they deserve to live as long, full, and happy of lives as possible. Sofi sure appreciates that! 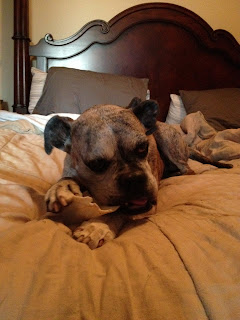 Sofi was one we weren't sure about when we first pulled her. She was a stray who turned up at a local shelter. Since she's an older gal, about 10 - 12 years, we knew that she wasn't likely to be adopted even if she was completely healthy. But she was tugging at a lot of heartstrings, and we thought she deserved to live her golden years in comfort. She had a yucky mass on her side that she had to get removed at the vet. When he tested it, he told us it was a "malignant adencarcinoma." I don't know a lot of medical terms, but what that means is it's the yucky c-word all boxers dread -- cancer. :( She may not have a lot of time left, but Sofi is loved and welcome in her foster home until it's time for her to go on to the Rainbow Bridge. 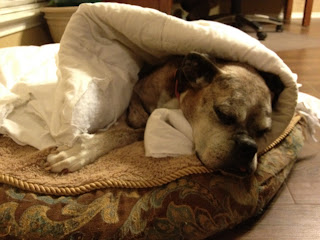 You can go here if you want to learn more about Sofi (or any of our other Keepers) or make a donation to her care.
Posted by Matilda the Boxer at 9:43 AM