Pigeon came into my life during my last year of law school. She was a stray outside my parents' home, and I fell in love with her gentle demeanor and powerhouse purrs. She went to live temporarily with a friend until I finished school and got settled back in Texas. I tried several names on her, but it was my brother who started calling her "Pidge" because of her strange cooing purrs. She was always my quiet kitty, hanging in the background and letting her big brother take up most of the attention. While Scribbles was always a dog in cat's clothing, Pigeon was very much a cat -- independent, aloof, but very insistent when SHE decided it was time for snuggles. She's always been extremely sociable, coming up to visitors she'd never met and demanding to be petted right now, thank you.

Pigeon's changing attitude about dogs is probably the one thing I'll remember most about her. When I first brought Casey home, she was completely horrified and wanted NOTHING to do with this crazy furball. She hid on top of the kitchen cabinets for *two years* afterwards, and was still reluctant to come further down than the countertops even after that. But she warmed up a little to Cinderella, and then when Jessie came home she suddenly found her sister from another mister. The two of them were SO adorable together, watching Jessie's super slow and careful play so Pigeon wouldn't get scared and the two of them snuggling up together time after time for naps. Pigeon clearly mourned when Jessie died, and she desperately wanted the same relationship when Matilda joined the family. It took the energetic puppy quite a while to figure out how to handle a by now pretty frail cat, but Pigeon refused to run and hide from her and eventually they bonded and became sisters too.

Pigeon was always very low-key and happy right up through becoming an elderly cat. But she started to show signs of kidney failure and liver disease at 16. Over the past year or so, I've watched her slowly decline, constantly debating with myself when enough is enough. This weekend she stopped eating, so I knew it was time. I held her as she crossed to the Bridge, and told her that she was the very best kitten ever. She was 17 years old, and I had her for 16 years, the longest of any of my pets. I think that as soon as Pigeon crossed the Rainbow Bridge, she gave a happy headbutt to her other siblings and then jumped straight on the couch to play with Jessie and fall asleep curled close together. Thinking of them together again makes me smile through the tears. 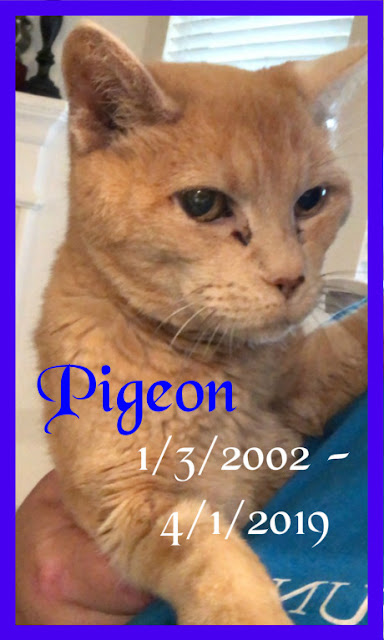