An impawtant call to arms!

LBR is facing a tough situation. The short story is that a dog that was held by a shelter for long past its mandatory waiting period, in LBR foster care for two months, and adopted in a happy home for seven months is now being claimed by people claiming to be the original owners. The original owners harassed the adopters and are now suing LBR.

LBR is determined to fight, because this could invalidate every single shelter adoption -- which in turn would just discourage people from adopting through shelters and result in more euthanizations. LBR has established a separate defense fund and is seeking help from supporters and fellow rescue organizations. Even if you can't donate, try to spread the word! 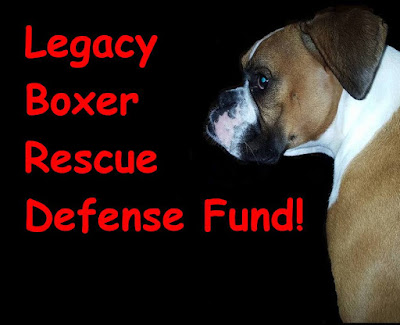 
We wanted to let everyone know about a heartbreaking situation we are facing for the first time in our 15 years as a rescue.  Legacy Boxer Rescue has always and only worked with shelters and owner surrenders.  We are not able to help found or stray dogs unless they go through a stray hold at the shelter closest to where they were found or the legal owner can sign an owner release form.  We do this in order to comply with the laws and regulations in the cities we work in.  We have now been told this is not enough.

Last year, a shelter reached out to us for help with a boxer who had been in the shelters for 24 days after being picked up running down the road.  The shelter advised that no one reached out to claim him, even though they held him much longer than is their practice on the chance that the owner would reclaim him.  We evaluated him, as is our normal practice, and pulled him for a foster home.  He was in foster care for 2 months (with no contact from the alleged owner again--now approaching three months since missing) and was adopted into a great family.  He has been in his new home for 7 months and has bonded with their dog and that family.  He is now part of that family.

The person claiming to be the owner wanted us to call the adopter and ask them to give the dog back.  We told them that was not something we could do.  They then set about researching the adoption through unknown means, and found out who adopted the dog. They sent the new family an email directly.   Contact information from the adopters was not provided by Legacy, and the contact information used was not even information that Legacy had.  They new family was emailed at their jobs!  When the new owners did not reply, the person claiming to be the owner hired a lawyer and has filed suit against Legacy Boxer Rescue and the new owner to get the dog back.

Unfortunately, the case law cited by their attorney is one where the Texas Supreme Court found that ownership of the dog had not transferred to a rescue and the ownership still belonged to the former family.  That case did not involve a completed adoption.  That dog was still in rescue and unavailable for adoption because of heartworms.  This is a key distinction between that case and the one Legacy faces.  In the case of the LBR boxer, the city ordinances of the shelter where the LBR dog came from, states that after stray hold, a dog may be placed for adoption.  He was placed and the adoption is complete.

The situation LBR faces has far reaching ramifications that affect every rescue in Texas, every adopter, and everyone related to rescue.  We believe the ownership of the dog was transferred upon adoption.  The other lawyer disagrees.  He does not believe the shelter or the rescue could ever transfer ownership of this dog.  That cannot be right.  It would call into question every adoption ever completed by a shelter or a rescue, other than actual owner surrenders.

We hope that we can get some case law on the books that favors the rescue community and the thousands of animals that are helped every year.

This defense will not be cheap, but Legacy plans to weather the storm.  We are setting up a separate fund for the defense of this suit because this fight will be costly--tens of thousands of dollars likely.

If any rescues have had a similar claim, please let us know.  Please follow this case and help if you can.  We solicit the attention of all rescues in the state of Texas, our legislatures and adopters.  Please sound your voice and join us in this fight.

DONATE NOW! https://www.gofundme.com/legacy-boxer-rescue-inc-defense-fund
Posted by Matilda the Boxer at 4:25 PM