My kitty brother Scribbles went to the vet yesterday to talk about a nasty lumpie Momma suddenly noticed on his side. The vet loves all of us (well, mostly me!) and fit them in very quick for an appointment. She felt at the lump for about two seconds before saying, "Oh yeah, that's gotta come off." Uh-oh! 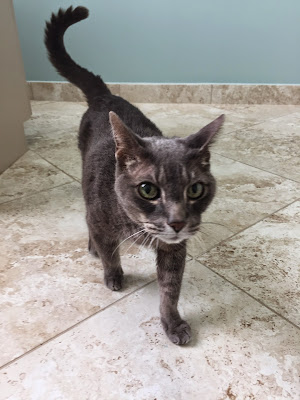 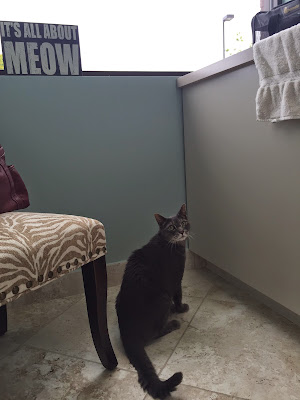 But the news got even worse. When they weighed Scribbles at the start of the checkup, he was only 12.5lbs. He's usually 16-17lbs! That means he lost a quarter of his body weight. That's not good at all! The vet was super worried about that, and she drew some blood and stuff to test. The test results are supposed to be in tonight, and hopefully they'll shed some light on the reason for the weight loss. (It could be something like a thyroid problem or kidney issues.) But as long as they don't show anything that would make it bad for him to go under anesthesia (a worry with a 17-year-old cat), he'll have surgery ASAP to remove the nasty lumpie. After that, the worry will be whether the vet is able to remove the whole thing and what the biopsy shows it is. The weight loss could also be because the lumpie is cancer and it's spread a lot. :(

Thank you for all the POTP you've sent his way. Please keep it up a little longer.
Posted by Matilda the Boxer at 7:00 AM