Sometimes I think all our hard work is just ignored by those silly humans. I mean, I do my job, and I don't expect a big fuss over it. But really, is a little ear scritch and "Thank you, Casey" too much to ask for? No, instead I get mocked. 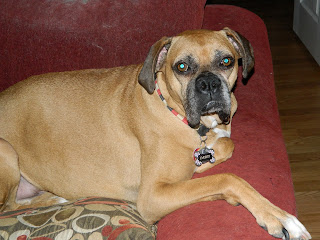 Take Tuesday, for example. Monday were the big skeery storms in Oklahoma, and on Tuesday we were supposed to be getting storms here too. Big hail, high winds, and possible tornadoes. Momma tried not to act like it, but I know she was skeered. So I, being the wonderful compassionate dog that I am, stuck right to her side the whole afternoon, like glue, to reassure her. I know it helped. But the storm was getting loud, with all that thunder and stuff, and I was tired of it skeering my momma! So I decided to let it know who was boss. I ran right to the door and BARK BARK BARK BARK BARK!!! You stay away from my momma! I'm here, and I'm going to protect her! The whole rest of the storm, I let it know Casey was there and on the job! 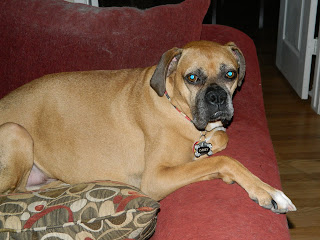 And did my momma appreciate all my hard work? NO! She -- furiends, I don't know if I can even say it. It just hurts so much. She.... laughed at me. 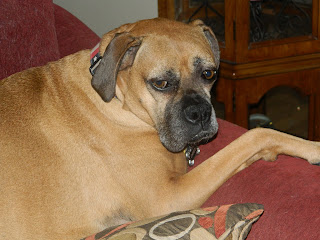 Sniff. Let down, betrayed by my own momma. She told me, "Barking won't make the storm go away, Casey." She laughed and petted me and told me not to be skeered. ME?!?!? That storm was skeered, that's who was skeered! Not ME! The NERVE.

I may never forgive my momma for this. Well, at least not until the next time she has treats.
Posted by Matilda the Boxer at 8:07 AM