For Foster Friday, I'm going to share with everyone the story of a foster dog who's not a foster anymore, but she didn't get adopted. I doubt we'll ever have a stranger Foster Tail.

Bailey fka Calypso will know be known as Calypso AGAIN......

Bailey was found by a neighbor after she was abandoned in the backyard of a house, starving to death. The neighbor notified animal control to come pick her up. Since the owners couldn't be found, a court date was set. A volunteer from LBR had to appear on her behalf so a judge could intervene and award her to Legacy Boxer Rescue.  The owners would have 10 days to appeal the judge's ruling. If not, she would become a Legacy dog.  Since this was ongoing case until the appeals deadline passed, Bailey was put into the BWPP (Boxer Witness Protection Program), never to be heard from again until it was safe for her to come out of hiding.  Now here's where the story really begins...

On October 4th, the day after the judge gave temporary custody to Legacy, we received an email from the animal control officer that he was able to contact Bailey's owner. It turns out her name was Calypso. Her owner is in the US Army Reserves and was currently deployed in Africa. He was scheduled to return to the US on October 18th. He had been deployed there since January and had no idea why his dog was abandoned. Turns out the person that Bailey was left with decided that she had more important things in her life than to take care of her!

October 17th was the deadline for an appeal of the judge's decision, so she became a Legacy dog at 5:00 pm.

On October 18th, Staff Sgt. William Eberlin contacted LBR about trying to arrange a reunion with his dog. Now, we love a good reunion as much as anyone, but Bailey is an LBR dog now and we have to keep her best interests in mind. What happens if he gets deployed again? These tough questions had to be thought about.

Fortunately, Bailey's daddy was able to allay our fears. I am happy to report that earlier this week, Private Calypso returned to active duty with Staff Sgt. Eberlin and kids.  Calypso's foster family has volunteered to babysit her any time he has Reserve training, and if he is deployed again, Calypso will be making a road trip to PA to stay at her grandparents.  She will furever be a Legacy Dog with all of her other cousins, but she has be reunited with her perfect family once again. 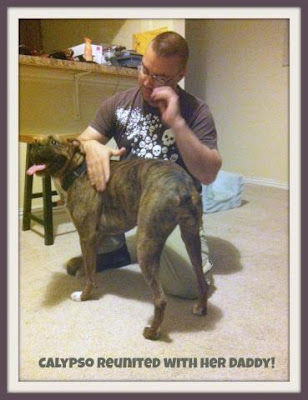 Thank you, Staff Sgt. Emberlin, for the sacrifices you make for our country. We're so glad we could keep Calypso safe while you were deployed to make our country safe!
Posted by Matilda the Boxer at 8:00 AM