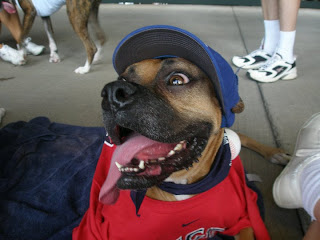 As you can tell, I'm pretty excited! If you hadn't heard, the awesome Texas Rangers won the American League championship last night against the Yankees. That means they're World Series bound!!! Everyone down here in Texas is pretty darned excited, including the dogs. Betcha didn't know there were so many canine Rangers fans, did you? Well, we love the Rangers because the Rangers love us! They host a "Dog Days at the Ballpark" event in the summer, and this year a whole bunch of my LBR buddies went to cheer on our favorite team!

This is Blitz. I like her tutu, but don't let it fool you! She can knock you down something serious if you insult her Rangers. 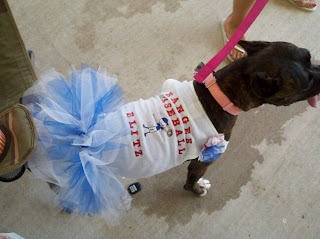 This handsome guy is my buddy Slate. We got to ride to the game together. He had a really awesome jersey, didn't he? (And everybody's got our tongues sticking waaaaay out because it was really hot!) 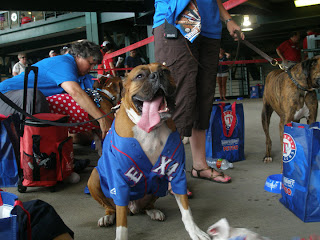 This is me with my girlfriend Noel. She has a tutu too, but hers is even prettier than Blitz's. She's always dressed so nice. 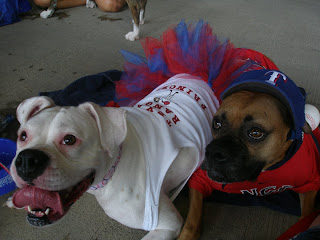 Boy, some guys get all the attention! This is Handsome Man, aka Mulligan, and his sister Maggie Mae. The Rangers bat girls decided they really liked Mulligan and wanted their picture taken with him. Whatevs. 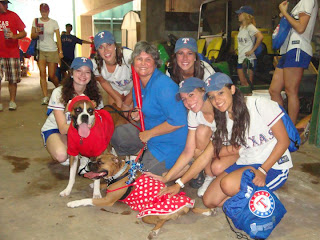 I can't wait for next year's game! Especially since there will be an awesome 2010 WORLD SERIES CHAMPIONSHIP flag flapping in the breeze, perfect for us to bark at.